In Shining Cliff Woods, near Whatstandwell, are the remains of an ancient Yew tree known as the Betty Kenny Tree.
Betty Kenny’s real name was Kate Kenyon and she was married to Luke.  Luke and Betty Kenny lived in Shining Cliff Woods as charcoal burners during the 17th and 18th centuries for over 50 years.  They came from Papplewick in Nottinghamshire each year to help with charcoal burning.  Eventually they stayed on a permanent basis and brought up a family of eight children in a movable hut.  The hut was cone shaped with an opening covered by a large board and the turf they used in making charcoal.  Inside the hut they had a turf bed and on cold nights they took in a portion of their wood fire to keep them warm.  Their favourite spot in the woods was in the shade of a huge yew tree under which one of their children is buried.
The yew tree became known as Betty Kenny’s Tree, because, as she worked, she laid her babies in a hollow in a bough of the yew tree and sang “Rock-a-bye baby, in the tree top, when the wind blows, the cradle will rock, when the bough breaks the cradle will fall, and down will come cradle, and baby, and all”.
Shining Cliff Woods was owned at the time by the Hurt family, who were fond of the Kenyons.  Francis Hurt (1781 – 1854) commissioned James Ward, a Royal Academy artist, to paint their portraits and invited the couple to pose separately in the dining room of Alderwasley Hall.  The Kennys sat for this painting some time before November 1811.  It is likely that the ages of Luke, 96, and Betty, 88 given at the time were incorrect.
The night before, the artist went to see where and how they lived, it had rained.  He found Betty bailing out water with a wooden bowl from the steamy bedchamber, where it had settled at the foot of the bed.  However when Luke was standing for the first portrait in the large dining parlour of the hall, he said “I’m miserably uncomfortable from the cold, but I’m much warmer and comfortable in my snug little hut, than I am in these great and comfortless rooms”.  When Betty came to sit for her portrait, and saw that of her husband, she burst into tears, exclaiming, “Ah! Poor old soul, there he is, for all the world, with his round back! He was once as straight as an arrow; but he is welly done.” It is thought that she meant he was nearing his end rather than complimenting the artist. 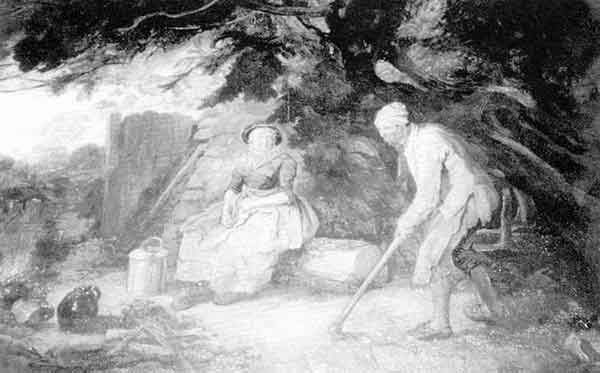 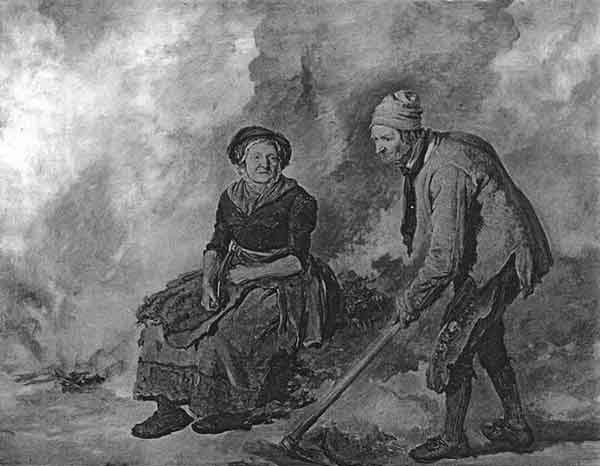 A second painting, shown above, was completed as a study for the main painting and was first exhibited at the Royal Academy in 1817.  It is not known where this painting is but a photograph of it exists at the Lowewood Museum, Hertfordshire.
As a study for the two paintings Ward made a pencil and black chalk drawing of the hut in which the Kennys lived whilst charcoal burning in the woods at Alderwasley.  The ‘large board’ is presumably the structure Ward has lightly depicted behind the hut. He has clearly shown the turf covering of the hut and the tools of the burner’s trade. 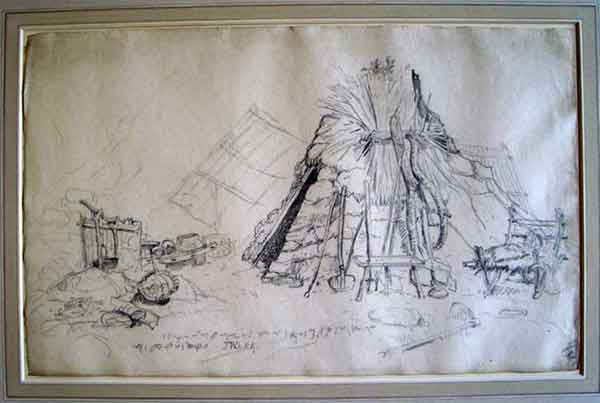 After toiling for years charcoal burning, they accumulated a sum of ten pounds.  A thief having found this out broke into the hut, dragged them from their bed, and, after treating them with great cruelty, robbed them.  Luke is thought to have died soon afterwards.
The Wirksworth Parish Register records Luke Kenyon’s burial as 5 January 1814 aged 96 years. The vicar noted that Luke had lived the most part of his time in huts in the woods and burned charcoal and his wife who was 94 years old had walked from Alderwasley for his funeral.
It is believed that Betty lived on and danced at a party in the Hall, held to celebrate her 100th birthday.  Many of their descendants lived in Bonsall, Alderwasley, Crich and Crich Carr. 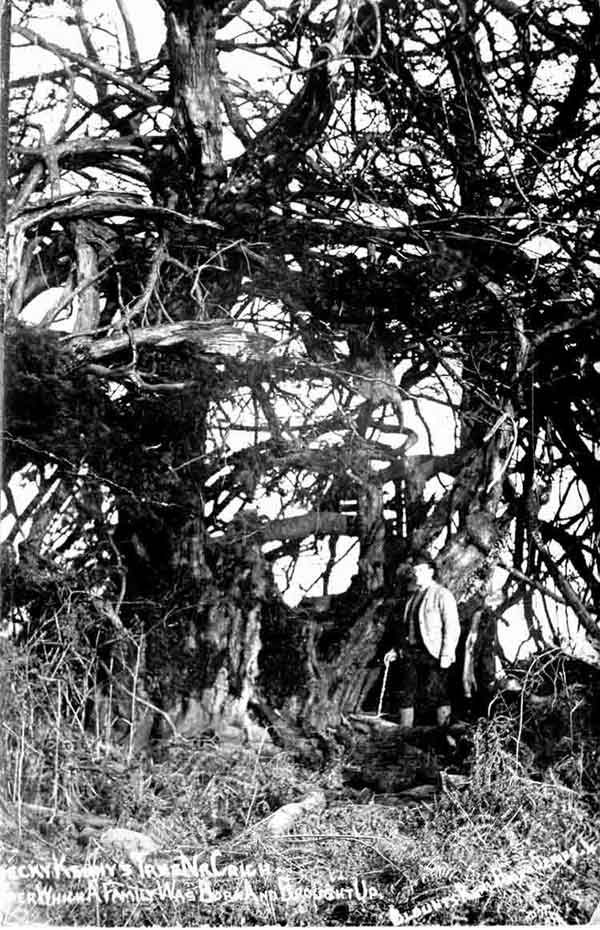 Writing in 1909 Louis Hurt stated, “The tree is said to be 2000 years old. About twenty years ago some mischievous boys set fire to it, and now only the gigantic trunk and some enormous boughs remain which, however, still send out shoots.” 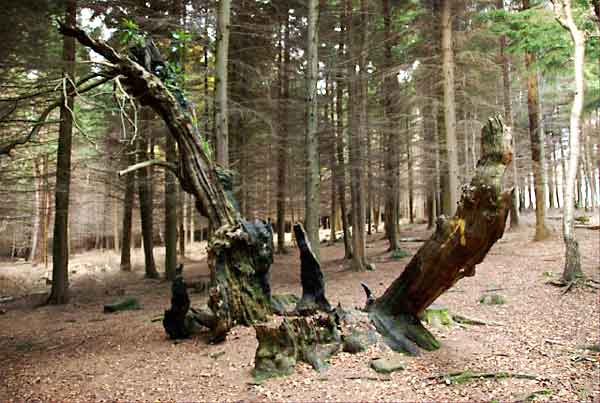