How Whatstandwell got its name:

It is generally accepted that the name of the village dates from the 1390’s and is a corruption of Walter Stonewell who lived near the difficult river crossing of the turnpike road from Crich, in a house rented from the abbot of Darley.  At the time when the bridge was built in 1391 by John de Stepul at his own expense, Walter (or Wat) Stonewell rented a cottage where the bridge was constructed, which was mentioned in the agreement  with the landowner and the name of the tenant was used to identify the site.  Wat was a common abbreviation of Walter and Watstonewell’s bridge was then corrupted to Whatstandwell.  On some old maps including Burdett’s Map of 1791 it is shown as “Hottstandell Bridge”, probably a literal spelling of the local dialect.  A record exists that in 1633 there were two freeholders living there, Anthonius Wylde and Jacobus Oates.  A mid nineteenth century Ordnance Survey map shows it as “Whatstandwell Bridge”.

It was only the buildings; the bridge, the Derwent Hotel and the cottage and old smithy building adjoining which lie between the river and canal, which were truly Whatstandwell.  The rest of the village was known as Crich Carr, but today, although the school is still called Crich Carr C of E primary, the whole area, including Longway Bank and some farms on the opposite bank of the river, is covered by the name Whatstandwell. 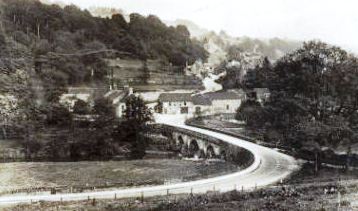 Officially there is no parish of Whatstandwell and it previously had no legal or administrative existence and it was never a lordship or a manor.  The River Derwent forms the boundary between the neighbouring parishes of Alderwasley on the west bank and Crich Carr on the east.  Whatstandwell was part of Crich Carr, but the Midland Railway named their first station Whatstandwell Bridge and the Ordnance Survey accepted the name.  People also used the name and gradually it became accepted as Whatstandwell.